I did not expect my daughter’s 11th birthday party to be so hard to organise. I should have realised. Books and films are either too ‘babyish’ or too old for these girls on the verge of leaving primary school. And I’d already broken my promise to her dad that this year we would do something small. I mean, after all, it’s the last party she’ll have with this group of classmates.

We were holding a joint party with her best friend. After some serious playground talk, the all-class disco was scrapped over the tricky question of boys. Go Ape was out because of minimum heights. I can’t handle the responsibility of taking a group ice-skating. We’ve done Kite Studios; cinema and pizza; bowling and Oxygen. And a lovely-sounding simple sleepover with DVD is no longer a viable option with this group of alpha girls.

So the manic Google search began and we discovered some amazing ideas, such as candy-making, go-karting and music-making. But we all loved most the sound of Graffik Gallery. We knew it would involve graffiti, boiler suits, a creation to take home and a great location—Portobello Road. The cost did mean it was definitely one to share with at least one friend, and follow with a simple birthday tea at home.

We arrived at the very trendy gallery and I immediately worried over the girls’ noise levels and proximity to three-figure pieces of art. I wondered whether the owners understood what it means to have eight 11-year-old girls in their space. But we were swiftly shown to the back room where the party happens. It has cover but is thankfully partially open-air. Surrounded by very funky graffiti-covered walls, the girls donned their boiler suits and masks. The laughter that followed felt enough to already declare birthday party success. Their instructor then managed to gain and maintain their attention throughout the two hours—laid-back enough to be admired, clear and skilled enough to make sure they followed his instructions.

They started by creating their stencils and sketching out the piece of art they would produce and were given the chance to have a practice run. Next, they got their hands on a massive box of different coloured spray paints and began work on their canvases. I managed a quick escape for a quiet delicious sandwich at the local Portuguese bakery and came back in time to give them some snacks outside, and some fresh air. I then watched each of them carefully create their art. I’ll be brutally honest: when I heard how carefully they had to spray some parts and hold their stencils, I was not expecting much more than some smudges and splodges.

You can see the result for yourself. Every single little creation was, to quote the girls, ‘awesome’—well, we think so at least. They left beaming—and possibly slightly intoxicated by the fumes. The gallery’s website says it’s for eight years and up but I think eleven and up is the right age. It means that they can really appreciate the experience of producing their own graffiti art and leave with something they want to hang on their walls. Oh, and no party bags needed—woop woop!

For more information, check out Graffik Gallery’s website or email them at workshops@graffikgallery.co.uk. 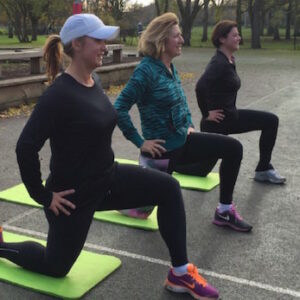 Get moving at The Little Gym