Trampoline parks are popping up around London and for good reason. Leaping around like a loon puts a smile on the face of people all ages; trampoline parks are great for burning off energy on a rainy day; popular for indoor parties; and jumping around working up a sweat at a trampoline park is exercise without thinking about exercise! If you have kids of varying ages a trampoline park is a handy option as the younger ones enjoy simple bouncing while the older kids like to do tricks and step up to the more challenging aspects offered such as foam pits to flip into or ninja courses to navigate. Having options to hand for indoor activities for kids in London is so helpful, especially on a rainy day.

I visited Flip Out Brent Cross with my family on a Sunday morning. My kids (3 and 6 years old) were jumping up and down before we’d even got anywhere near a trampoline, powered by giddy anticipation. Don’t fret if you’re not near Brent Cross, Flip Out says they are “officially the fastest-growing trampoline park operator in the world with over 78 outlets in 7 countries, and many more to come” so chances are you are – or soon will be – in the realm of a Flip Out location. 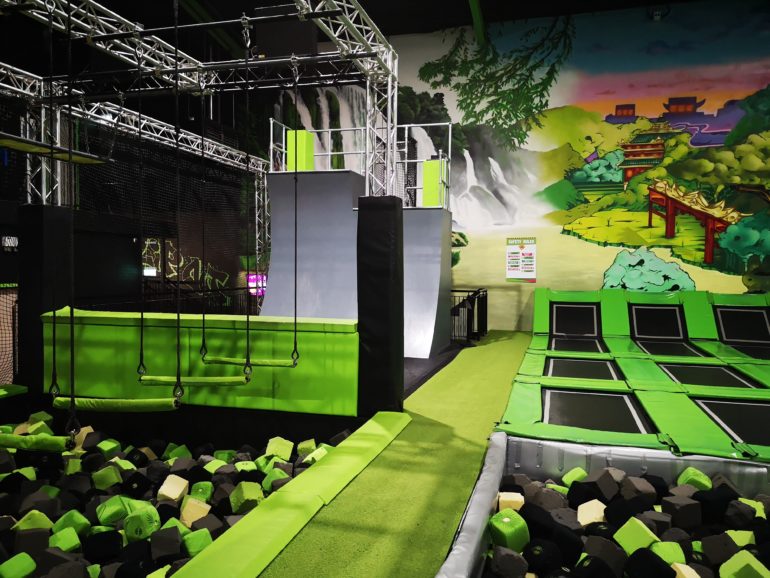 We always try to arrive at any weekend activity when it first opens – quieter roads/public transport and you arrive to a ‘fresh’ facility yet unsoiled by hoards of stampeding children. Sounds a bit Game of Thrones, yes, but I’ve been in the family fun trenches long enough to know what a difference a few hours can do to a place. And its toilets.

We arrived at 9.45am, parked for free right outside the front door and checked in quickly at the reception desk. Only glitch was that they were out of kid-sized trampoline socks, so I was glad we brought some we already owned. If you’ve never been to a trampoline park before, be aware you need socks with sticky grips on the bottoms, usually you can buy them there if you don’t own any already. We were then whisked into a room to watch a safety video and then we were in. I was pleased the see they have lots of free lockers right by the stairs up to the trampoline area, opened by combination that you create so no need for padlocks or coins. Be sure to bring water bottle for everyone as all that leaping about really works up a thirst and it saves you buying bottled drinks at the cafe (and creating plastic waste). 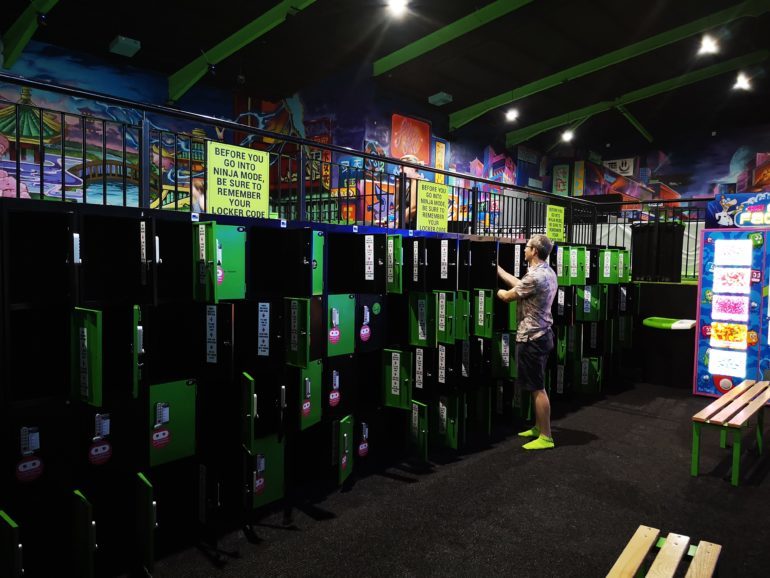 Even though it was ten minutes before our jump time started it was so empty the staff were happy for us to start. A sea of trampolines just for us! (ok there were like 2 other kids there). We eagerly explored every area. In addition to lots of trampolines, the other activity areas here are a Ninja Course – which is actually quite tricky, unfortunately too difficult for my six year old (who is a huge fan of watching Ninja Warrior on TV) but my husband managed to complete it. He was so proud. 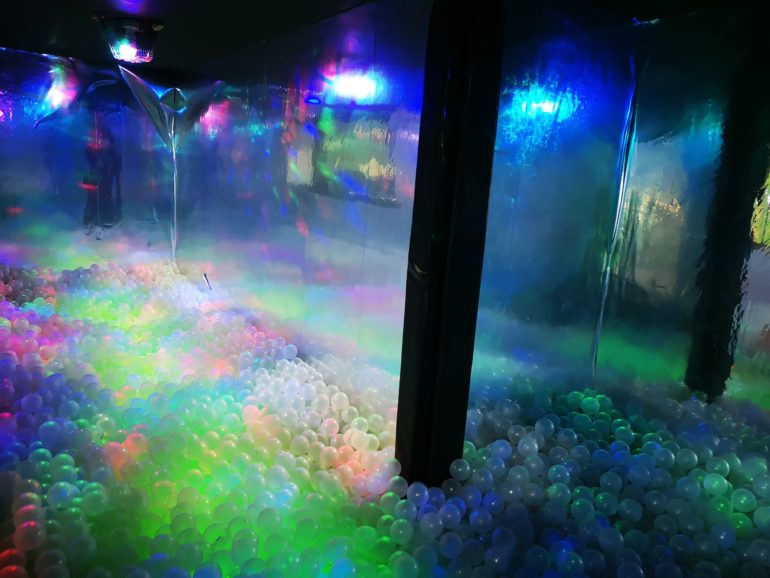 There are two trick zones, one for adults and older kids and one for younger kids. In these areas you can pretend to be a parkour expert or just mess around like we did. The tumble track is a long strip of trampoline on which you can do your best floor-routine gymnastics impression. There’s a Disco Ball Pit, which looks like a room full of iridescent bubbles. There are a couple of big foam pits to jump into and one has a balance beam over top, on which you can battle with bolsters, trying to knock your opponent into the pit (and/or pretend to be a pirate walking the plank, like my youngest). 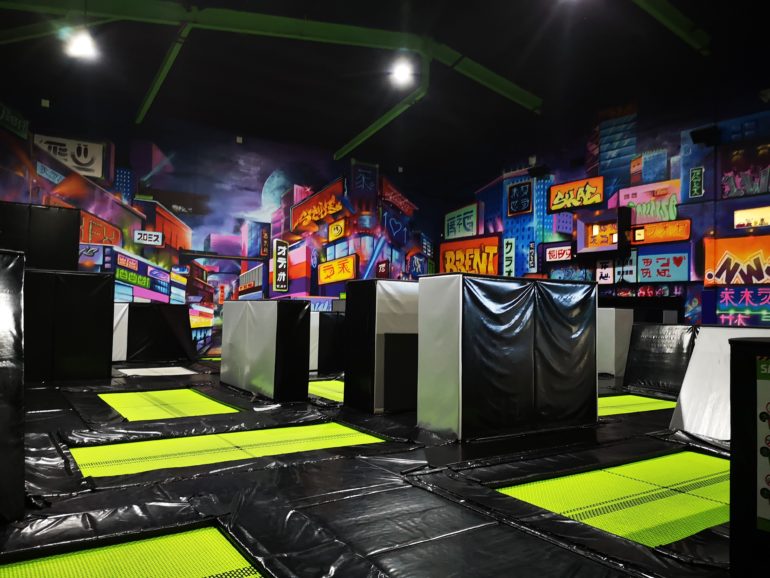 To the side of the trampoline area there are two digital games, one is a laser maze, which is a darkened room with beams of light cutting various directions that you have to duck under or step over to avoid and get to the other side. The other is an iWall, an interactive game where you run, jump and dance through various virtual experiences. There’s plenty to do here, and a cafe with booths to sit in if you need a break. I ran into a friend here (not literally, I watched the safety video and only one person is allowed on a trampoline at a time!) who says she’s been coming to Flip Out for years with her son. She mentioned they’d been to a birthday party the week before and it was great. So, just passing that on if you’re looking into indoor party ideas. She reassured me that the kids stuff themselves with food and cake AFTER jumping. 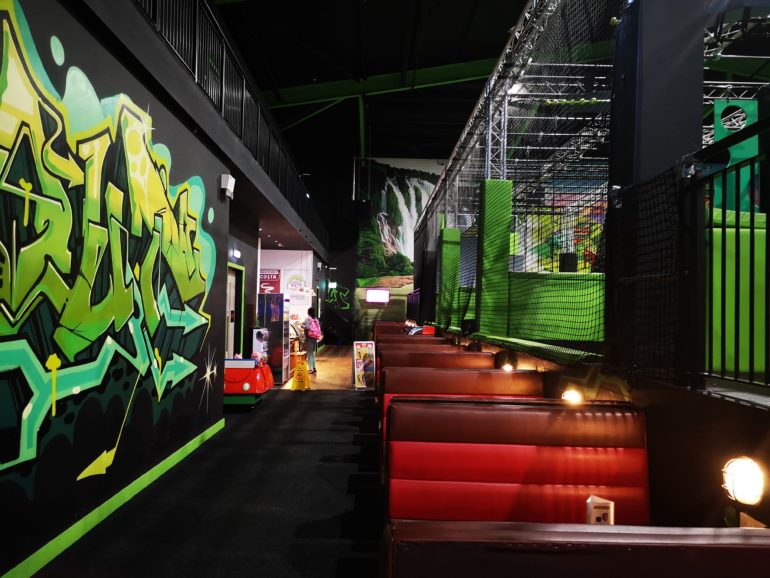 We will surely be back as my kids are already asking to return and a big, clean indoor play space on a rainy day in London is certainly something parents jump for joy about.

We were invited to try Flip Out. 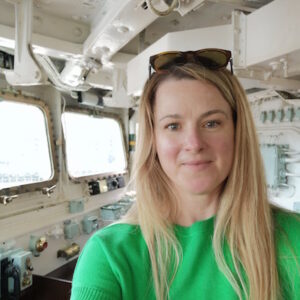 East London, Mum in the Hood

Bouncing off the walls at Waltham Forest Feel Good Centre