Bablands covers London playgrounds better than anyone we’ve ever seen. But which are her favourites for different ages? And importantly, best playground park cafe and toilet? Read on to learn more about Bablands founder Emmy, her new book and all her top playground picks.

I’m Emmy, a freelance writer, mum of two and founder of Bablands, an online resource for London-based parents and carers. I grew up in Yorkshire but spent a lot of time in London as a kid and it’s always felt more like home to me than anywhere else. I’ve lived here for 12 years – and in Camden for the last seven – and probably always will. Bablands grew out of my frustration at the lack of fun things to do with my eldest when I was on mat leave. I couldn’t envisage spending an entire year doing the same uninspiring baby activities over and over, so I started looking for more offbeat things to do. Five years later, I’m still on the hunt and still sharing my ideas via my website bablands.com and Instagram @bablands.london, which has grown into the most amazing community of like-minded child-wranglers. 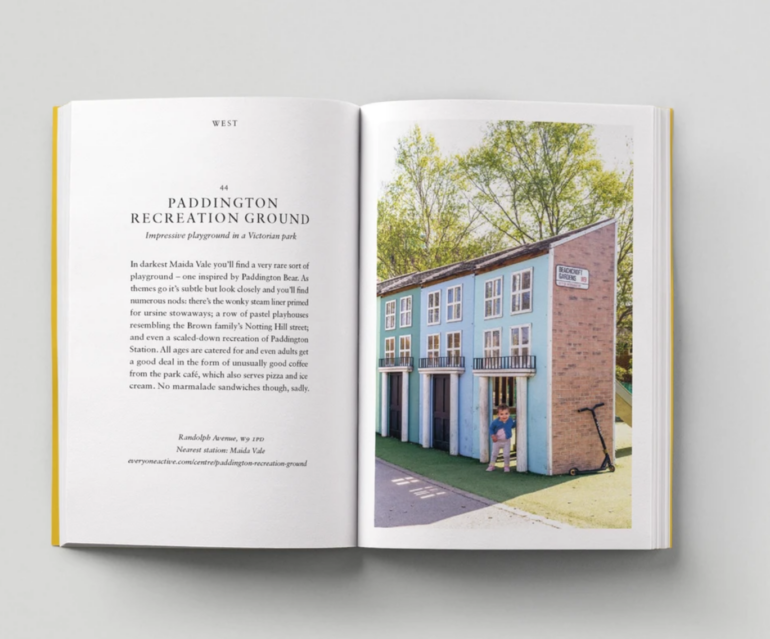 Tell us about your new book!

Hoxton Mini Press got in touch at the end of last year. They’d been wanting to put together a guide to kid-friendly London as part of their An Opinionated Guide series for a couple of years and asked if I’d be interested in writing it. I was already a fan of their guides and I’d been thinking about turning our adventures into a book for a long time, so it was a bit of a dream come true. An Opinionated Guide to Kids’ London is a pithy, honest guide to hanging out in the capital with under-fives. It features more than 50 of our absolute favourite places, from stylish play cafes and indie kids’ shops to family-friendly museums and imaginative playgrounds, plus some gorgeous photography. I wrote it while looking after my two-year-old full time, which was interesting.

Playgrounds are generally pretty rubbish for pre-walkers, but both of mine loved the Holland Park Toddler Playground when they were tiny. It’s essentially a giant sandpit with a few pieces of standard equipment and some baby swings, but there are toilets with baby changing (for women and men) right next to it, and the park itself is beautiful. Another good one for babies is the South Dock Park Marvellous Maze in Canary Wharf, which is tiny but packed with sensory delights for little ones: think mirrors, talking tubes and various music-making equipment. We also recently discovered Greenleaf Park in Walthamstow, which while nothing ground-breaking is the most perfect baby playground.

Paddington Recreation Ground in Maida Vale is great for all ages, but the toddler area is especially brilliant with its scaled-down version of Paddington Station and pastel-coloured playhouses. Horseferry Playground behind the Houses of Parliament is ideal for little ones and in such a lovely spot right next to the river. Bloomsbury Square is a newish metal playground that doesn’t look that exciting, but we meet friends here a lot as it’s central and – most importantly – gated. I also really like Asteys Row in Islington – it’s got everything you’d want in a toddler playground and is filled with brightly coloured rocks.

Cator Park in Kidbrooke, Battersea Park Playground, Holland Park Adventure Playground (not technically an adventure playground) and Tumbling Bay in Queen Elizabeth Olympic Park are all amazing for older kids, with genuinely challenging equipment and plenty of scope for imaginative play. There are loads of great (actual) adventure playgrounds in London too. 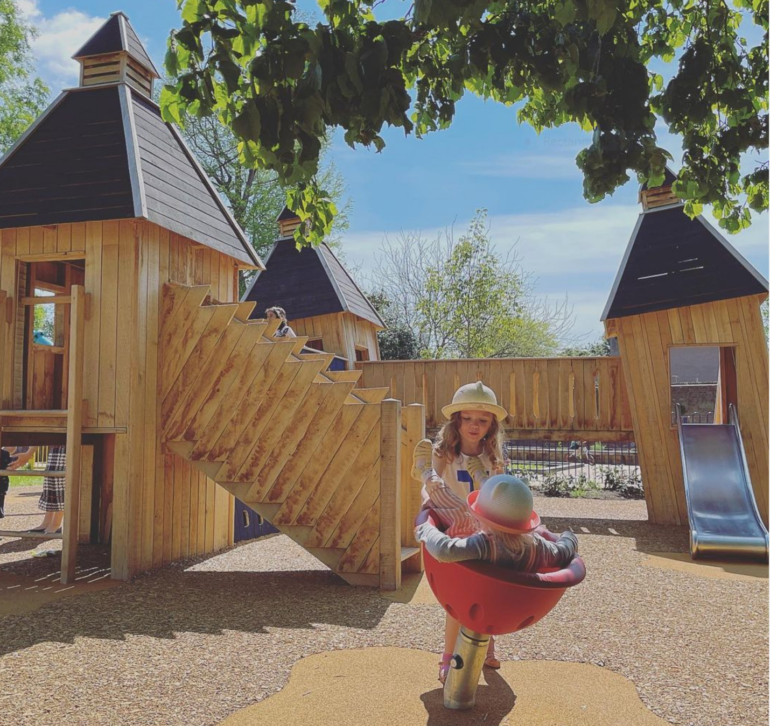 There are so many, but favourites include Cator Park, the RAF Museum playground in Hendon, Burgess Park’s Woodland Play Area in Camberwell, the Children’s Garden at Kew, the Magic Garden at Hampton Court Palace, the Biodiversity Playground, Holland Park, Paddington Recreation Ground and Marylebone Green in Regent’s Park. We also recently discovered a very cool playground outside Canons Leisure Centre in Mitcham.

We’re currently really enjoying the new Elephant Park playground in Elephant and Castle, which is essentially a giant, landscaped rock pool with loads of fountains shooting out of it. Tumbling Bay, Greenwich Park and Peckham Rye Park all have good water-play areas, and we love the splash pool in Victoria Park. 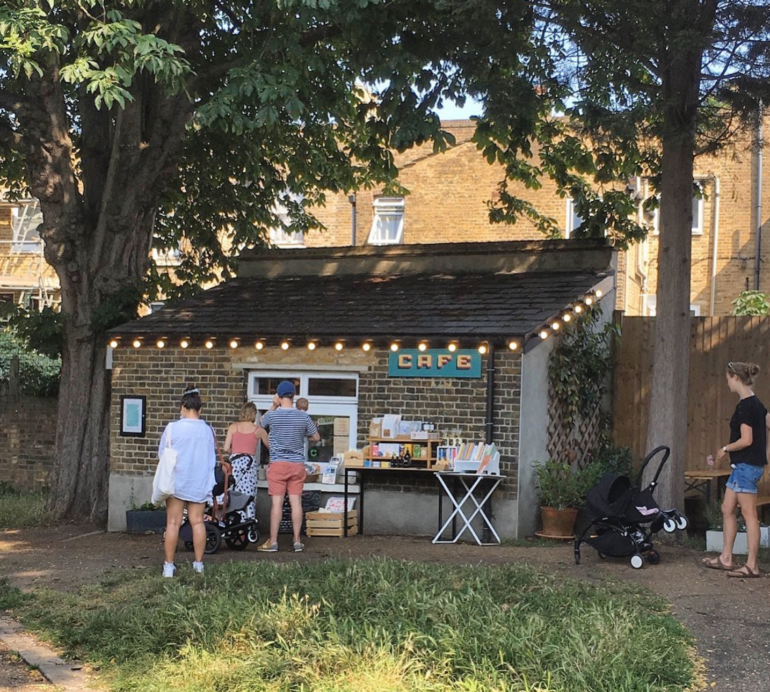 The Bower Hut in Camberwell’s Brunswick Park is great: excellent brownies, Marine Ices gelato, and they even sell Hoxton Mini Press books! We really like the two cafes in Victoria Park too.

Honestly, so few of them have toilets I’m happy if there’s one at all. The best ones are probably those next to Tumbling Bay – they’re relatively new, buggy-accessible and generally clean. Westfield Stratford also has a parent room with feeding areas, child-sized toilets and microwaves, and the brilliant Biodiversity Playground is right outside. Basically, if you like your playgrounds to come with good toilets then get yourself to Stratford. 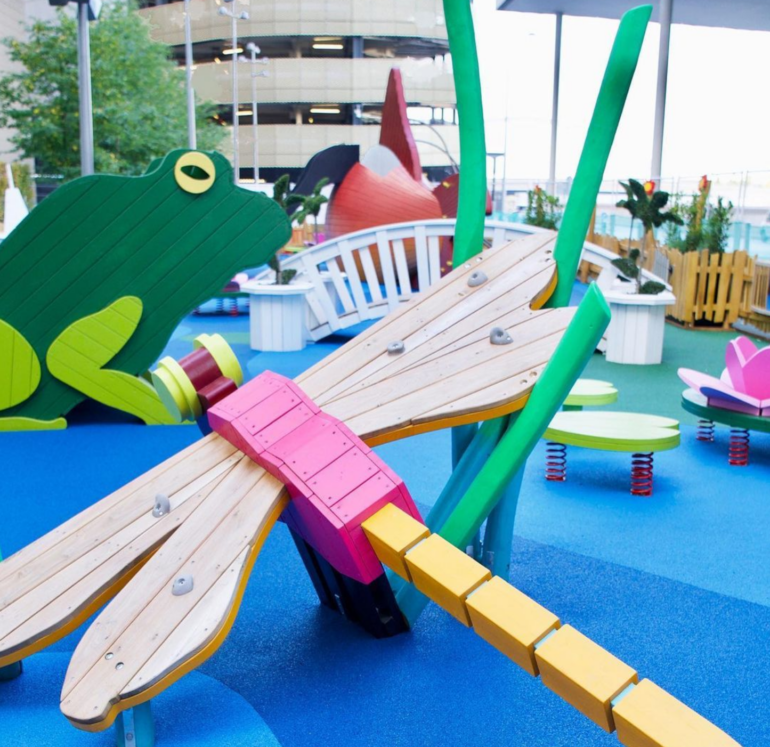 Danish playground designer Monstrum is my all-time favourite. They’ve designed these mind-blowingly imaginative playgrounds all over the world (including the Biodiversity Playground pictured above at Westfield, Stratford) but most of them are in Denmark and Sweden. I’m determined to go on a Monstrum tour and see them all one day. I also love PlayEquip, who designed the new Elephant Park playground in Elephant and Castle and the incredible Alexandra Road playgrounds in South Hampstead; Erect Architecture (Holland Park, Tumbling Bay); Duncan and Grove (Burgess Park Woodland Play Area, Children’s Garden at Kew); and Russell Play, who’ve designed too many to mention.

Most annoying playground feature that you see way too often?

I know they’re a classic, but I hate swings. My youngest is obsessed with them and I’ll regularly get stuck pushing her for at least 20 minutes. Sometimes we’ll travel across London to play in the most inventive playground imaginable, and all she’ll want to do is sit in a swing. 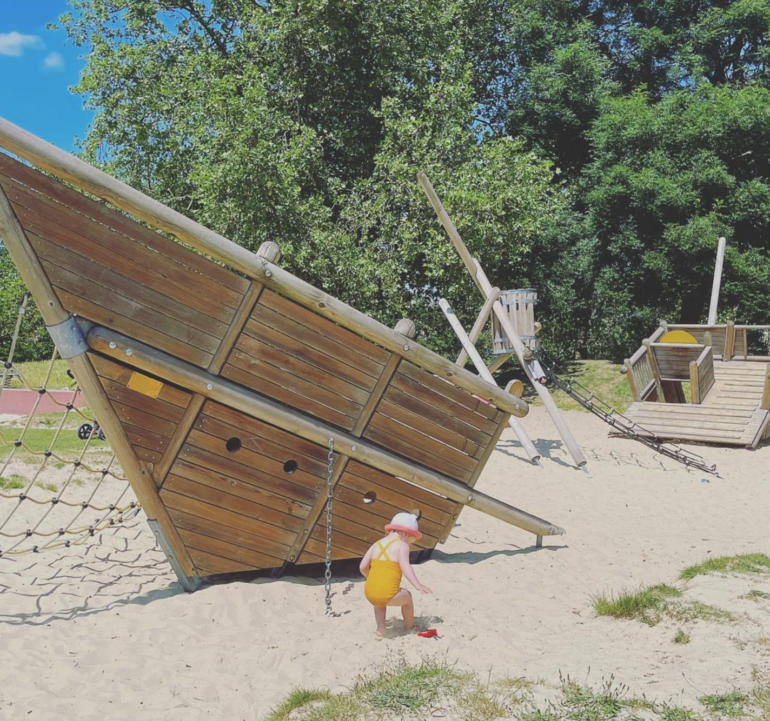 Favourite playground feature that you wish was more prevalent?

While you can’t go wrong with a sandpit, to be honest I hate seeing the same features over and over again. We went to Berlin a couple of years ago and loved how wildly the playgrounds there differed from one another. It shouldn’t have to cost loads of money to produce imaginative, innovative playgrounds. There’s also a depressing dearth of accessible/inclusive playgrounds in London. Disability-friendly equipment shouldn’t be a novelty.

Thanks for sharing Emmy! Be sure to follow her online and check out her book.